This year we invited the children of Twinfix to enter our Christmas card competition. We received some fantastic entrees from family members of employees across the business and are pleased to announce that Jayden-Lee age 4, who is the nephew of Lyndsey our Management Accountant, won the competition to design our Christmas greeting card with his lovely snowman. A big thank you to all who entered. Here are some pictures of the other entries: 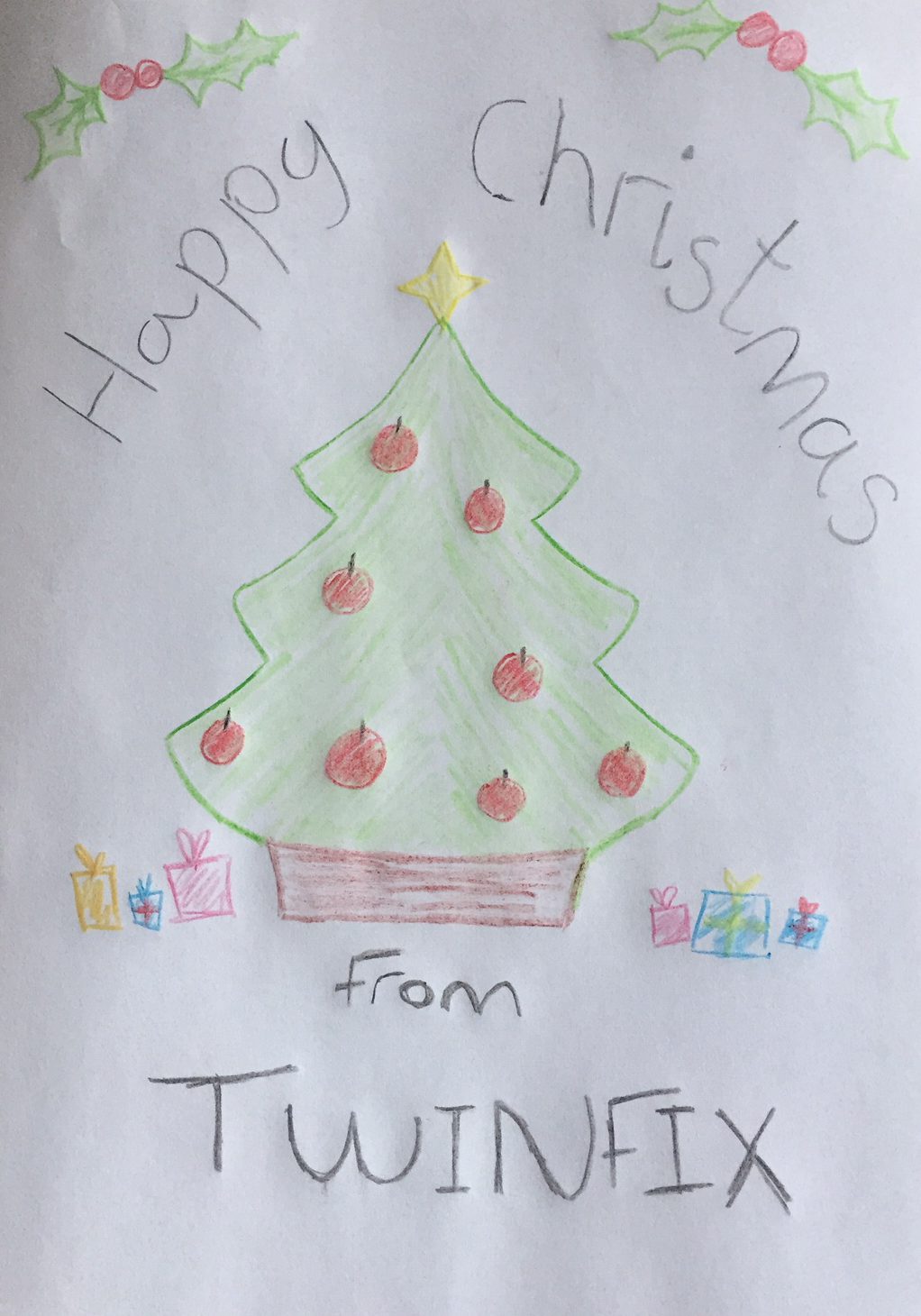 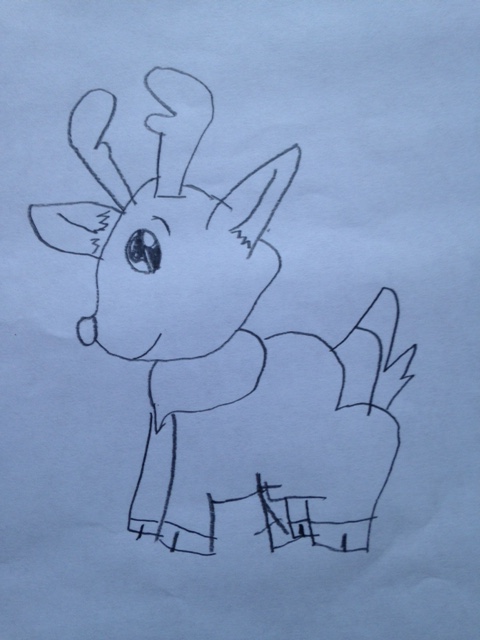 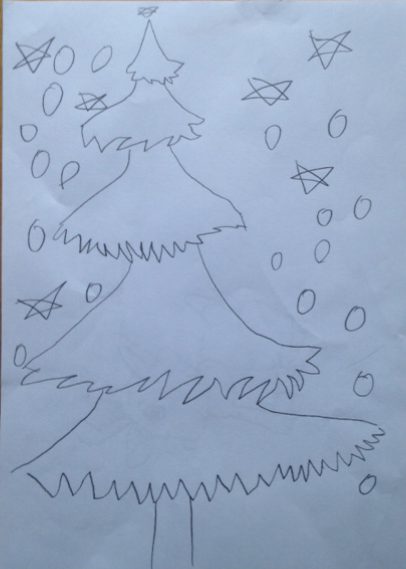 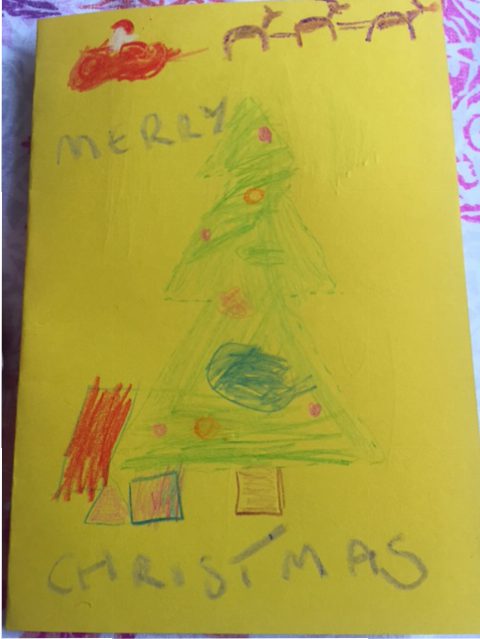 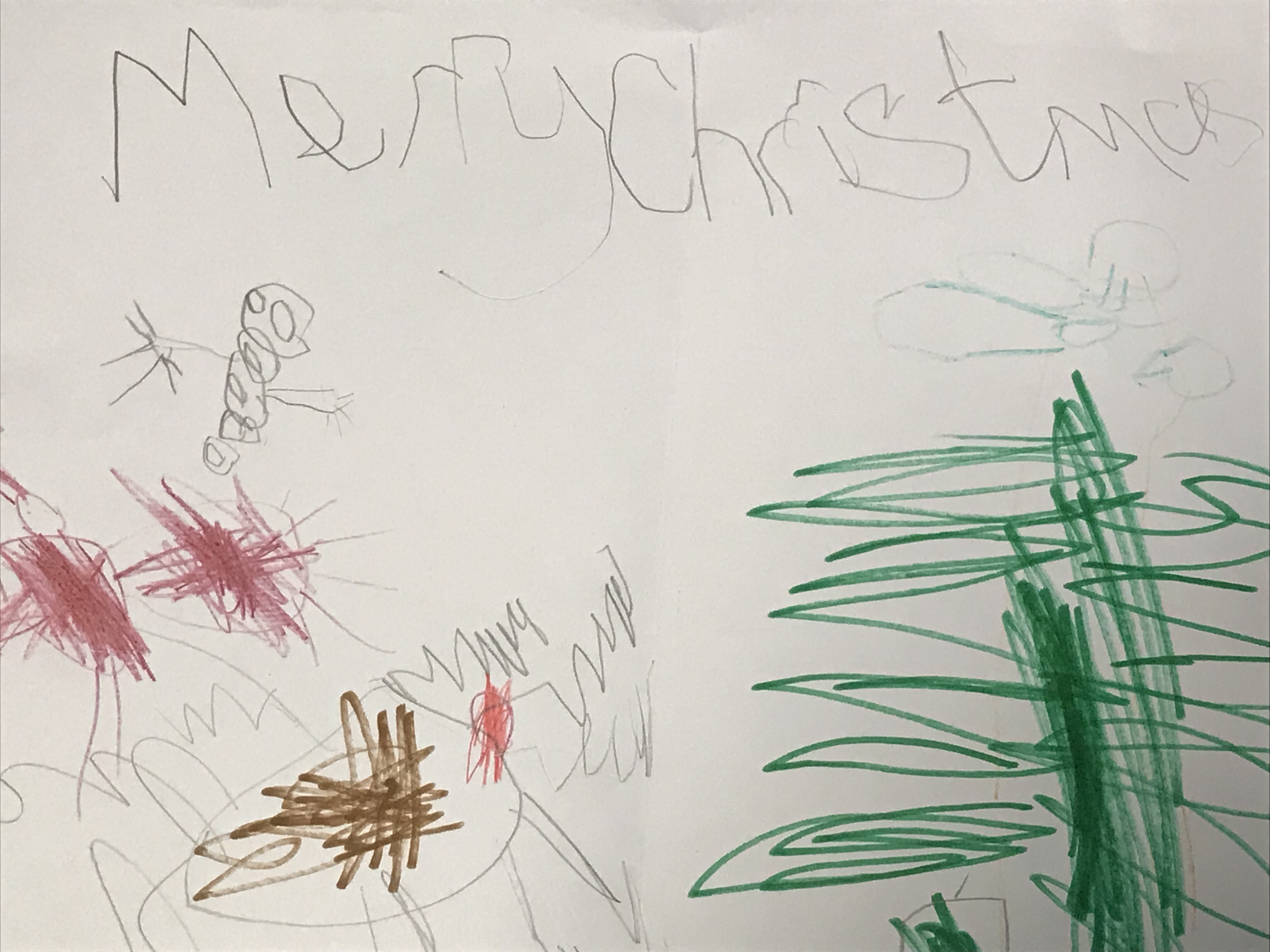 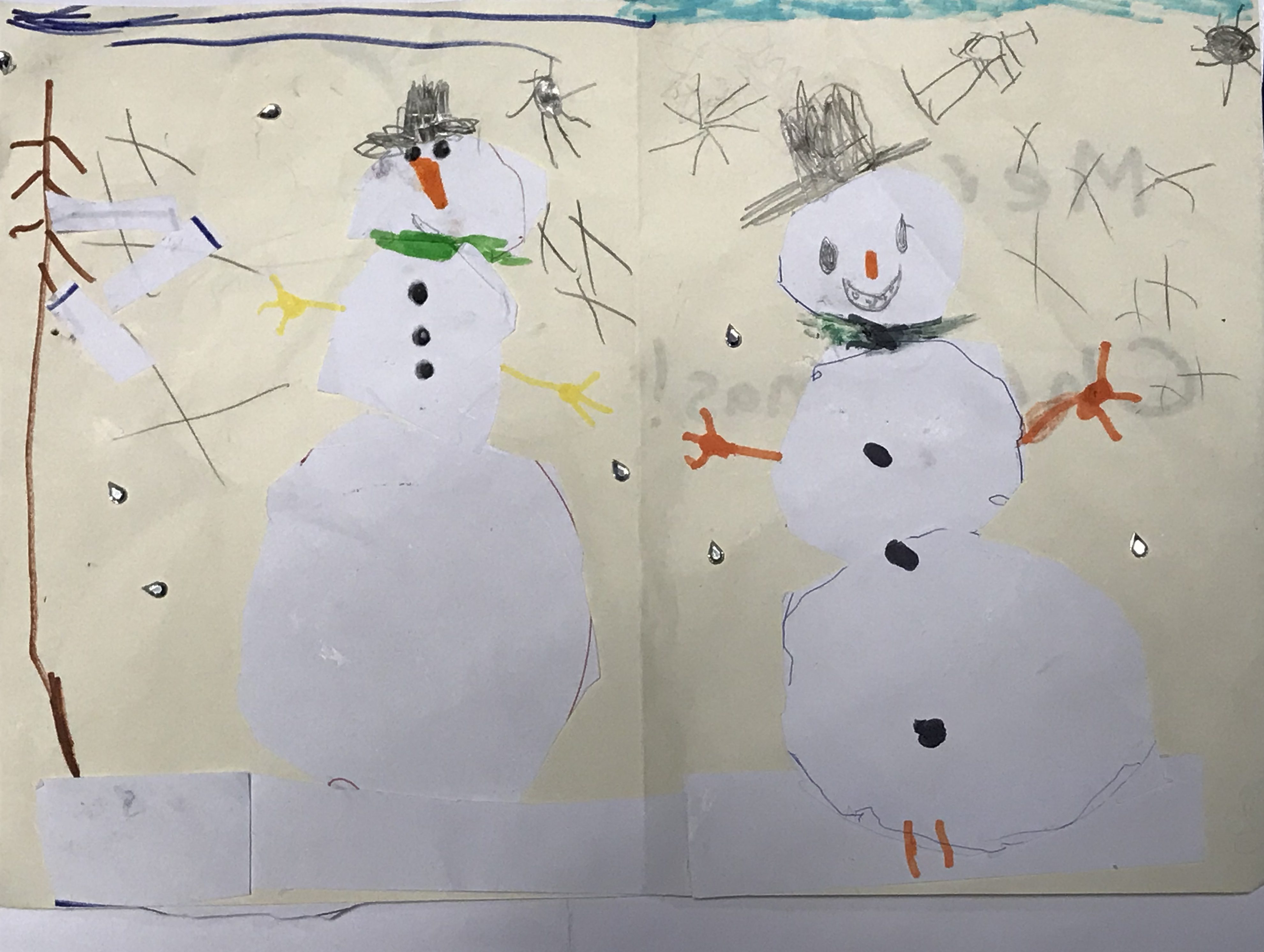 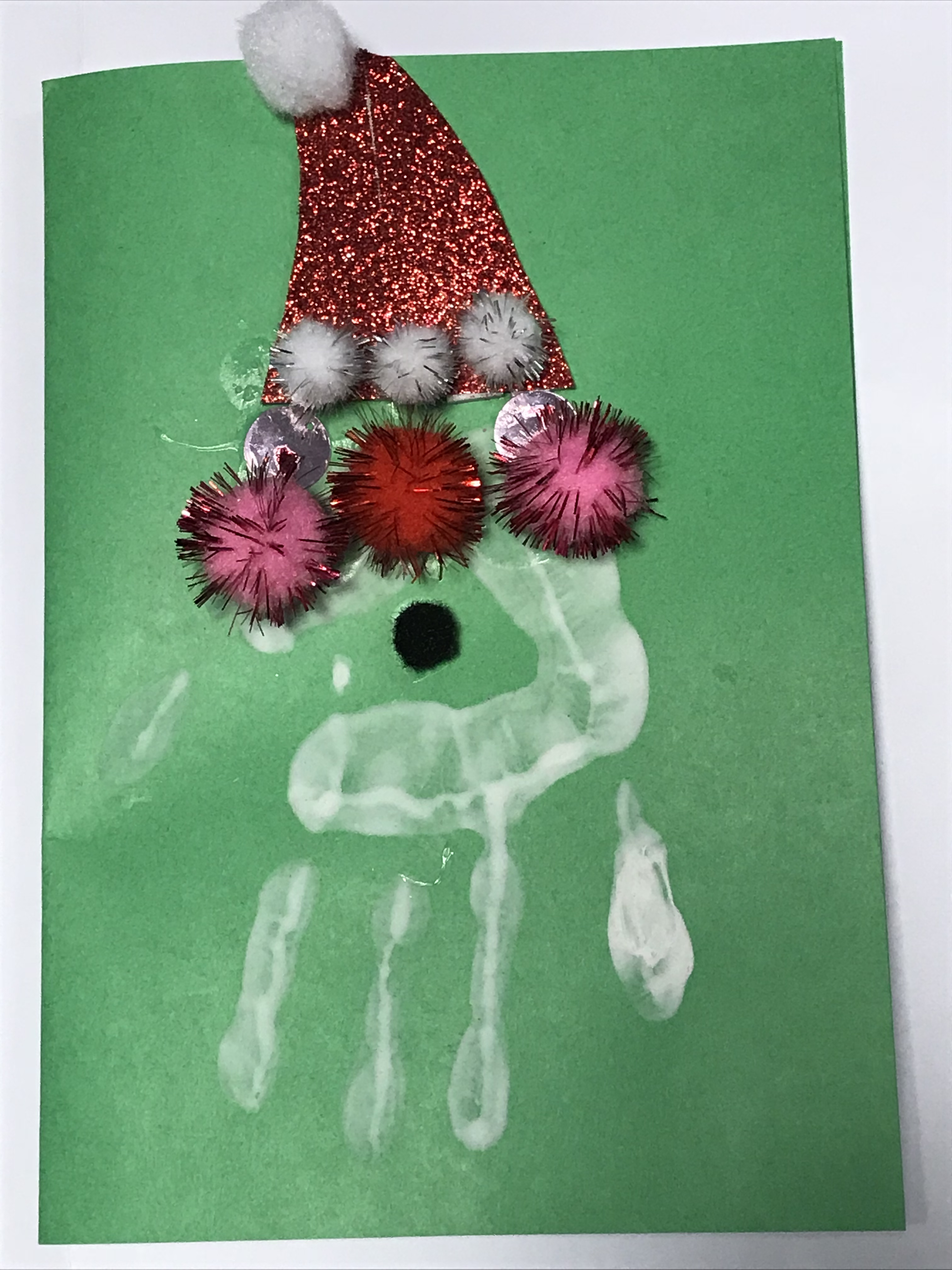 We are looking at recruiting an External Sales Person to sell our product range to our customers in the south of England. These customers will mainly be Main Contractors and some School Directs.
Specification selling will also form part of this role managing sales in excess of £1 million.
Responsibility for managing and proactively developing business and sales in your sales area.
A highly driven sales person who is always striving to hit targets is essential as well as strong account management skills. The ability to work independently and be a self-starter is key to this role as it’s based outside of the office. Strong computer skills are essential.
Experience of selling to Main Contractors is essential. Desirable would be experience of selling canopies or street furniture via Main Contractors and also experience of specification work. We would consider a background in rooflight or building envelope materials.

October sees Twinfix participating in four exhibitions. It would be great to see you at any of the following:

Our latest newsletter is now in circulation. Connect 2018 is an overview of what we’ve been up to in the last 12 months and a chance to see some of the faces behind Twinfix.

Our Georgian Wired Polycarbonate brochure has recently had a make-over. You can view and download the new look brochure here:

Please let us know if you would like a hard copy and we will pop one in the post for you. Product samples are also available. 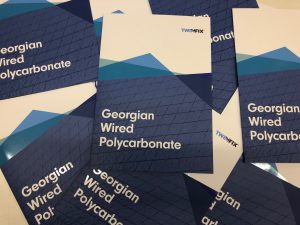 A Twinfix canopy has many practical uses in the care home community. If you own or manage a care home and are looking at ways to improve your residents’ quality of living, then a canopy could well be the perfect solution.

Being able to easily access a sheltered and comfortable outdoor space is of great value, allowing residents to enjoy a change of scenery where they can either sit and watch the world go by or enjoy a favourite pass time outdoors.

Access to fresh air can also help to speed up recovery from illnesses and can keep residents calm, happy and relaxed.

If you have a communal garden do you also have a provision for shelter from the sun? Our canopies are glazed with polycarbonate which offers full UV protection from the sun’s harmful rays.

As well as the highlighted benefits to residents there are also the everyday practical uses to consider such as providing shelter at entrances where those who are less agile take longer to enter and exit a building and can easily get caught in a rain shower. Similarly linking buildings with a covered walkway can be of great benefit.

If you have staff, visitors or residents who smoke and you want to encourage them to stand in a designated area then a canopy is the perfect solution.

A canopy can also be used to keep equipment, outdoor furniture, bins and bicycles sheltered from the elements.

Canopies can be lean-to (fixed to the building) or free-standing (an independent structure) to suit your needs and come with a range of glazing options for varying degrees of light and shade. In addition to our traditional offering of aluminium frames we now also offer timber canopies. Aluminium frames can be powder coated to suit your premises existing colour scheme and our timber canopies offer a natural and contemporary look, complementing a building’s outside environment by blending into the surroundings.

We are a family owned and managed British designer, manufacturer and installer of canopies, shelters and covered walkways. We hold all of the relevant health and safety accreditations and have been successfully supplying canopies in a variety of sectors for over 25 years.

You can rest assured that we have your best interests and requirements covered! 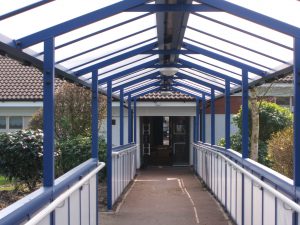 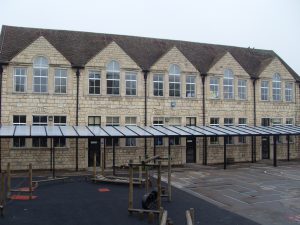 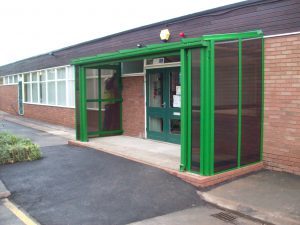 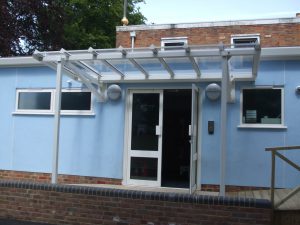 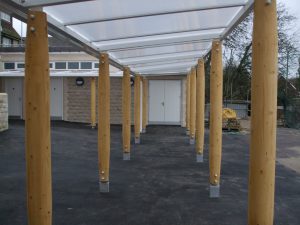 Phil Jones, our Sales Manager for the South, will be at South East Construction Expo on Thursday 13th September at South of England Event Centre in Haywards Heath, Sussex.

You can register for FREE tickets here: https://bit.ly/2oEe3OA

We would love to see you there! You can find us on stand 163. 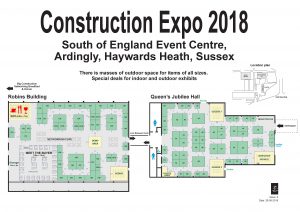 We are looking for an experienced Marketing Representative to oversee the marketing for Twinfix. This will involve generating ideas and formulating a monthly plan. Typical activities mainly include direct mail and email campaigns and placing advertising within relevant trade publications whilst working to a monthly budget.

You will be a creative self-starter, with common sense and the ability to use your initiative . A proven track record in a marketing role is essential. Ideally you will have experience in construction marketing although this is not essential.

The role will involve immersing yourself in everything to do with Twinfix and this will mean regular interacting with all the departments across Twinfix. The ability to liaise with different people and departments is essential.

We supplement our main activities with social media so a good understanding of the various social media sites and how to use and maximise them is essential.

Being organised will be key to this role to ensure all activities are completed. You must also be flexible as different opportunities can present themselves and you should be able to act on them.

Twinfix has completed one of its largest and most unusual canopy installations to help protect a multitude of hungry schoolchildren from the elements.

The 6.2m x 7.8m partly freestanding canopy has been erected between two buildings at the former independent North Cestrian Grammar School in Altrincham, Cheshire, which has been attracting a plethora of pupils since it became an academy in 2016.

To meet the needs of the additional 80 students per year, the school has invested in new design and technology and science and food technology suites as well as a complete refurbishment of all of its classrooms and a new dining room that will be twice the size of the existing canteen.

The clear Twinfix canopy was required to provide a “cost-effective” shelter for the students as they wait in the lunch queues outside the canteen.

It is unusual in that it comprises vertical gable ends of 16mm triple-wall polycarbonate as well as the 10mm twin-wall non-fragile polycarbonate roof which is curved to a 6.9m radius. The gable ends were assembled in the Twinfix factory and the roof on-site.

The roof comprises 11 panels 68mm wide and 6.3m long which are clamped between two-part 60mm glazing bars while the gable ends use 88mm wide and up to 3.2m high panels slid into single-part 70mm bars.

The matt blue (RAL 5010) polyester powder coated aluminium frame with black PVC gutters is fixed to the two buildings via wall-mounted square posts, with one gable end open for 2.2m as an entrance.

“I suspect the main reason was cost but also the lead time was the shortest of three companies. It has proven to be robust enough to deal with daily queues of hungry children and the colour matches the school blue,” he said.

After the canteen is converted to new music rooms the canopy will continue to provide useful outside space.

Mr Bergin added: “It will be a shelter for rainy days and the area will have some outside seating. Some events, like summer fairs and bun sales, are held outside and this is a suitable sheltered area.”

North Cestrian was one of 49 schools in 2016 to be approved by the Department of Education to become a non-selective, non-fee-paying academy through the Government’s Free School programme.

This means it can still set its own extended curriculum, term dates and length of school day. Its governing body oversees and operates the school but pupils do not have to sit an entrance exam. 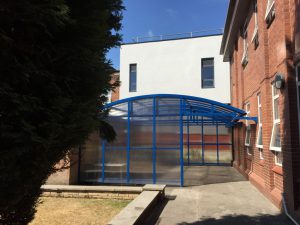 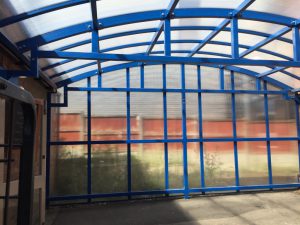 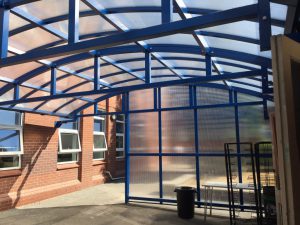 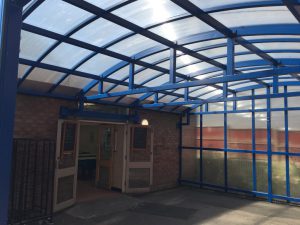