The original Bowdon Church School just couldn’t cope with its increasing numbers of pupils and a brand new two-story building with the same footprint area as the previous school has recently been built on what was once the playing field.  Charles Shorland of architects Bowker Sadler of Stockport incorporated two Twinfix canopies into the design and Twinfix worked closely in collaboration with main contractor Willmott Dixon to fulfill their part of the project.

Manufactured from rust-resistant aluminium powder coated to RAL 7037 matt Dust Grey both of these free-standing canopies were fitted with Multi-Link-Panel roofs glazed with 25mm multiwall polycarbonate.  The 25mm product was specified as its complex internal ‘X’ structure helps to deaden the drumming noise sometimes heard when heavy rain falls on to thinner multiwall.  The panels conform to the HSE’s recommended drop test for fragility ACR[M]001:2014 with a B designation, meaning they are classified as non-fragile.  The two canopies were fitted adjacent to the reception classrooms on one side of the building and to the Year One classrooms on the southern side.

The Willmott Dixon team prepared the canopy footings and one of the Twinfix in-house installation teams installed the canopies.  Andy Slater, the Willmott Dixon Building Manager says “I’ve been delighted with the service received by Twinfix from start to finish.  Their installers were brilliant!”

The project originally started out as one small canopy adjacent to the Reception classes but the school team decided at quite a late stage in the build that they wanted to enlarge this both in width and length, add on the facility to enclose part of it and also requested a similar style of canopy on the other side on the building next to their infant classes.  The Twinfix team of Nick Featherstone, Sales, and Tom Bray, Project Office Manager, worked directly with architect Charles Shorland and the Willmott Dixon Building Manager Darrell Cullen to achieve the required changes within the rather short timeframe left of the build.

The result is two large canopies that provide shelter for a range of work and play activities.  The Reception canopy measures 30m in total length and 3.5m in width.  It consists of nine bays, each of which is 3.3m wide.  The middle four bays have vertical glazing at both ends using 16mm multiwall polycarbonate to create one big space that is fitted with four electrically operated roller shutters along the front. These also have manual over-rides in case of power cuts.  With the shutters down there is now a huge protected area of over 46 square metres for indoor-outdoor play for use when the weather is bad.  The higher slats on the roller shutters are perforated to allow light in, with the lower slats being solid metal to prevent dirt splashing into the area when it rains.  This lockable area also creates secure storage for the play equipment when the school is closed.

The Year One canopy is 3.4m deep and nearly 23.5m long.  It has six bays, five of which are 3.9m wide, with the first one being slightly smaller.  The middle two bays are fitted out as a secure play and storage area, similar to the other canopy.

Both structures incorporate the Twinfix aluminium rainwater system, also powder coated in RAL 7037.  The downpipes of this system were specially designed so that they fit closely to the canopy posts, meaning it is difficult for small fingers to gain any purchase and are therefore discouraged from attempting to climb up said posts!

Once the old single storey school is demolished pupils at Bowdon Church School will be able to access their new playing field; until then they will no doubt find their two canopies to be favourite places to play and congregate whatever the weather. 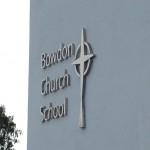 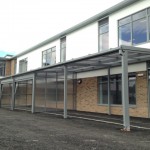 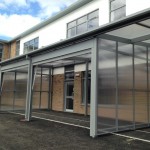 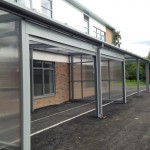 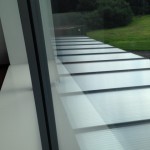 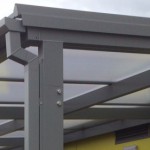 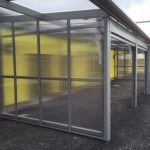 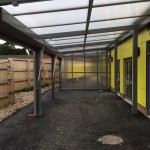 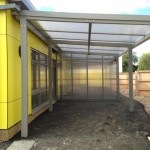 A canopy used as an outside eating area

Twinfix bespoke canopies make great learning and play spaces for children of all ages.  Individually designed for each location, they are available with a range of roof shapes.  Canopies may be a lean-to design if the construction of the building walls is acceptable, or free-standing where this is not the case.  Whilst the frames are usually non-rusting aluminium that may be powder coated in many different colours, they are also offered with a timber structure should this be preferred.

When you order a canopy from Twinfix you can be confident that it is an easy one-stop process as we have our own design, planning and installation teams, who will work seamlessly with our sales staff to make sure that your build runs smoothly.  For a more complicated design we also do a dry-run assembly of the structure before sending it off for powder coating.  This helps eliminate any minor irregularities resulting in a smooth build on site.

Due to health and safety recommendations, the norm for a Twinfix school canopy roof is usually tough multiwall or solid polycarbonate roof glazing panels that conform to the non-fragile requirements of the drop test outlined in ACR[M]001:2014.  You can choose from a range of tints in both the solid and the multiwall polycarbonate, depending upon the requirements of your site.  We even have a Georgian wired look-alike solid polycarbonate for Heritage areas.  Where multiwall is the preferred choice we generally recommend 25mm multiwall rather than 16mm, as the thicker material with its complex internal X structure helps to cut down the drumming sound of rain that may be heard when using the 16mm product.

Our canopies and walkways may be installed either during term time or during holiday periods.   Installation usually takes place over two phases.  Initially groundworks will be completed, then covered over and left to set.  One of our installation teams will then fit the actual structure a few days later.  Due to the modular design of our canopies installation doesn’t take very long so there is very little disruption to school life.

These canopies have proven to be of great use to many schools, where not only are they used for learning and play, but they often also accommodate coat hooks or lockers enabling pupils quick and easy access to their outside clothes.  Some schools, particularly nurseries, also request the fitting of colourful padded post protectors for additional safety, while others use a canopy to act as a focus on their main entrance, often combining signage into the design.  Yet other schools use their canopies as outside canteens – a much more economical and quick to build solution than a traditional bricks and mortar extension.  Whatever your needs, get in touch with us for a discussion on your requirements. 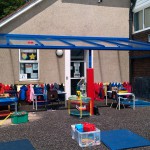 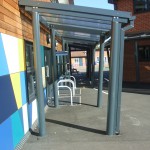 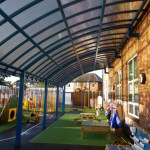 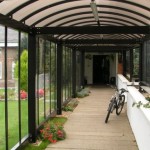 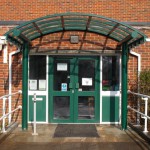 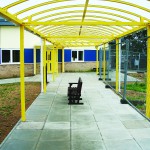