Offering a natural and contemporary look a timber canopy can really help to complement a building’s outside environment by blending into the surroundings. Take a look at our latest piece of literature dedicated to timber canopies. The sales team will be pleased to answer any questions that you may have.

An innovative modular rooflight system that can be installed in a fraction of the time of traditional split-bar glazing systems and is also non-fragile was the “cherry on the cake” for the refurbishment of a main line railway station’s Grade II listed entrance canopy.

The Multi-Link-Panel system glazed with Georgian wired polycarbonate from pioneering polycarbonate roofing supplier Twinfix was specified by Network Rail for the entrance canopy element of a £1 million refurbishment of historic Wigan Wallgate station in Lancashire.

Everlast’s contracts manager Colin Duxbury said: “Though we had knowledge of this system, we had not previously installed it. Twinfix arranged the delivery of all components to our site compound behind the station. The components were all marked up and came with a layout drawing showing which piece fitted where.

“The installation was relatively straightforward aided by a couple of instructive visits by Twinfix installers. The relatively narrow gutters made for a tight fit for some components but all in all everything came together on time with thanks to Twinfix for making a couple of emergency deliveries.

He added: “Once our installation teams got into the swing of things everything went well and the finished roof looked very smart. Twinfix Multi-Link was chosen primarily because of its non-fragile qualities – its ability to remain intact when subject to impact loading.”

The refurbishment of the Grade II listed canopy, which had been leaking, included the redecoration of all steelwork, the liquid waterproofing of canopy gutters and the replacement of the traditional glass with Twinfix’s lightweight polycarbonate system.

Polycarbonate is typically 200 times tougher and half the weight of glass and at Wigan Wallgate, combined with the Multi-Link-Panels which can be installed in two thirds of the time of traditional split-bar glazing systems, the system performed to Class B of the HSE’s recommended drop test ACR [M] 001:2014 “Test for non-fragility of profiled sheeting roofing assemblies.”

The 120m2 canopy at Wigan Wallgate is a steel-framed structure with three central lantern bays, each with a pitched glazed roof approximately 9m long by 3.5m wide, with similar but shorter bays each side of 3.5m in length. The Twinfix panels were installed at 600mm centres.

Colin said: “The new roof had to be approved by Wigan’s Conservation Officer. For understandable reasons he took his time reviewing samples of the proposed roof and needed a few site visits before finally granting his approval.”

To comply with planning requirements an additional detail was added to the standard design in the form of a small triangular fin at the top of each glazing bar. The purpose of this fin was to keep the glazing bar in keeping with the look of the original bar, ensuring a sympathetic restoration of the station.

“This could only be fitted once everything else was in place and there’s a lot of them,” said Colin.

“There was a lot of work to be done in a relatively short time and as the canopy works rolled into autumn, the weather began to turn which affected the painting of the steelwork and the liquid lining to the valley gutters, all of which had to be completed before we could install the glazing. Fortunately, the glazing itself could be installed regardless of the weather.

“The contract period for the whole scheme was 26 weeks, starting immediately after the Easter Bank Holiday 2017. The canopy refurbishment took place during the final six weeks and the Twinfix installation in the last three weeks of that – the cherry on the cake so to speak.”

The new canopy was just one element of the station refurbishment which included a new main slated roof, replacement of all first-floor windows and suspended ceilings, and repointing of external brickwork and chimneys.

Paul Childs, company secretary for the Railway Heritage Trust which part-funded the project, said: “The trust was most impressed with Network Rail’s recent sympathetic refurbishment of the forecourt canopy at Wigan Wallgate, particularly the use of Twinfix’s Georgian wired polycarbonate.

“The Georgian wired glass effect and surface texture of the material offered an appropriate and practical alternative solution to traditional glazing for this railway heritage application.” 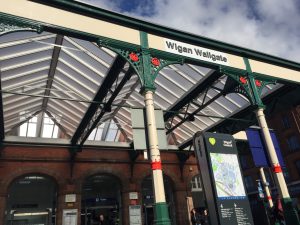 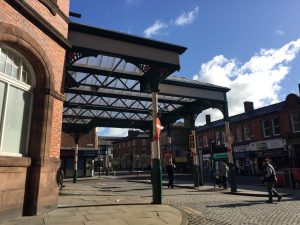 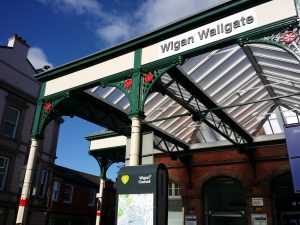 We now have a Facebook page dedicated to canopies for the education sector. It is primarily aimed at Head Teachers, Teachers, Teaching Assistants and School Governors who have an interest in the provision of an outdoor covered area at their nursery, school, college or university. We have included lots of examples of canopies, playground shelters, walkways, entrance canopies and covered eating and recreation areas. A free-standing school canopy fitted with a multiwall polycarbonate roof