Ready to make a career move? We’re looking for an experienced Project Coordinator.
If you are looking to grow your career and join a family of hardworking, passionate and dedicated individuals, you’ve come to the right place.
Take a look at the job description below and if you would like to apply send your cv and cover letter to: vacancies@twinfix.co.uk

Objectives of position
To provide Twinfix Limited with the support and expertise needed to deliver the project planning activities in a timely and efficient manner to meet customer and business    demands.

This job description is not an exhaustive list of tasks.  Additional activities will be required above and beyond those listed to carry out the role.  Changes to the role will occur as the needs of the business change

This year marks our 30th anniversary, find out what else we are celebrating in our latest newsletter below 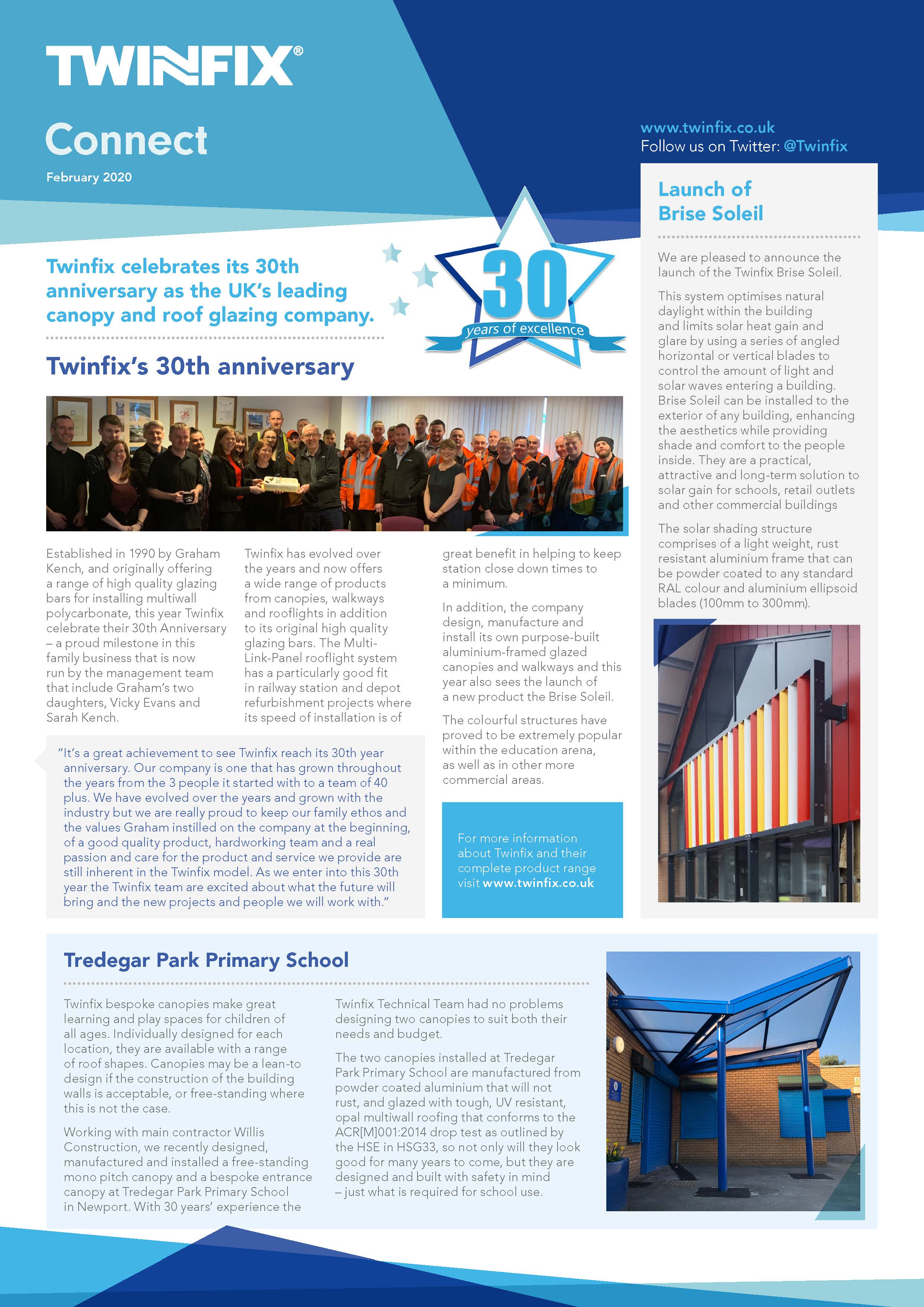 Our newsletter can also be downloaded in pdf form.

Handling over five million passengers a year, Liverpool John Lennon Airport is one of the UK’s busiest airports. Last year Twinfix worked with Principal Contractor Technical Construction Group Limited on a £750,000 project to design, manufacture and install a new covered walkway at the airport from the terminal building past stands 51 to 53 on the airside apron.

This is the third project Twinfix have been involved with at the airport, also installing a 36-meter walkway that enables continuous under-cover access from the car park into the airport building in 2015 and a smoking shelter in 2016.

The latest walkway spans 140 meters and is made from aluminium frame powder-coated in RAL7004 and 6mm clear toughened glass to the sides. The roof comprises of our Multi-Link-Panel NF system glazed with 16mm multiwall polycarbonate roof.  The walkway has a glass partition down the middle to ensure passenger segregation between domestic and international arrivals.

Our team carried out a dry-run assembly of the frame prior to powder coating. This dry-run check ensures that everything will fit together quickly and easily once we arrive on site. Our aluminium frame is specially designed to slot together easily and fitting the Multi-Link-Panels on the roof is incredibly quick.

Eddie Carson Construction Director at Technical Construction Group commented:  “Twinfix’s approach to the canopy work at Liverpool John Lennon was professional and showed that they have the necessary experience to undertake projects of this nature. Through the design and installation stages they worked with the TCG team to provide a safe, quality and value for money solution. Their collaboration with our team resulted in a successful project that was safely delivered and within expected time, cost and quality measures.”

Bognor Regis Station site dates from 1864, with the opening of a branch line to Bognor from Barnham Junction. The station was rebuilt in 1902 following a fire and renamed in 1930 when the seaside resort was awarded the appellation Bognor Regis by His Majesty King George V.

For the recent redevelopment of Bognor Regis town centre, improving the station environment was an important aspect of the redesign of public amenities, which run from the railway terminus towards the sea front.

Twinfix were approached by Principal Contractor Keltbray to design, manufacture and install roof glazing to replace 540 original glass panels in the 5 lanterns above the concourse that were prone to leaks.

The main challenge for Keltbray was to help Network Rail find an alternative solution to replacing the roof-glazing without the use of scaffolding, therefore carrying out the task with minimal impact on the daily operation of the station and its passengers. Keltbray adopted a safe system using cherry pickers and scissor lift technology, while also preventing the station from being exposed to the elements.

Keltbray Rail Engineering & Civils Project Manager Dave Parker commented: “This was a new and exciting project with difficult access issues untried or tested by either party, which had its difficulties, but with good collaboration with all parties involved these challenges were overcome and the project was completed to a very high standard with no accidents or incidents.”

The Multi-Link-Panel NF system installed at a vast number of stations across the UK, (including Aberdeen, Stirling and now Bognor Regis station) is an aluminium-framed modular rooflight system, designed with a patented fixing method that results in incredibly quick installation times – a real bonus when working with limited possession times. It is a cleverly designed and well-engineered roof-glazing concept that combines simplicity with sophistication, which has long been available as a non-fragile system that conforms to the HSE’s approved drop test for non-fragility, ACR[M]001:2014.

It is the ideal material for station canopy glazing because the combination of its light weight of just 7.2kg/m2, which is substantially less than the glass alternative, and impact resistance make it safer to install than the glass alternative. Being virtually unbreakable also negates future costly broken glazing replacement. It can withstand natural forces like severe wind, hail and snowstorms and absorbs vibrations caused by train movements without cracking, crazing or breaking. It also provides a low-maintenance, long-lasting rail roof solution, which is strong, corrosion-resistant and self-cleaning.

The successful roof re-glazing has provided Bognor Regis station with non-fragile, virtually unbreakable and attractive roofs, restored with a product that is in keeping with their heritage features.

Graham Richards, Network Rail Senior Asset Manager, Sussex Route commented “I am extremely impressed with the work carried out by Twinfix at Bognor and it is great to see how this type of work can be done safely without affecting the passengers using the station. Well done to all involved.”